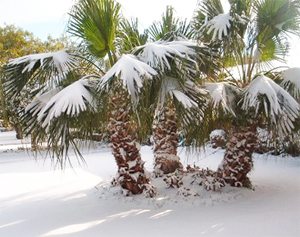 Perhaps the greatest temptation in cultivating plants of any type is to test their boundaries, due mainly to the gardener’s inability to resist a certain plant’s charms or just plain old curiosity. This web page will be devoted to this particular subject. The database/listing will be updated each Winter for posterity. If you have any information relative to this subject (including freeze results of your own) feel free to contact us with it.

A HISTORY OF FREEZE RESULTS IN CENTRAL FLORIDA

My main purpose in tackling this particular subject is to demonstrate to palm growers (the hobbyist & the commercial grower alike) the vast array of palms that can be grown with a little effort in central Florida. However it is necessary to preface a subject this “all encompassing” with a few of the obvious disclaimers, the first being micro-climates : lakes and other waterways to the north or north west of our gardens, tall plants that can provide windbreaks and large oak trees or other evergreens to provide a canopy which helps deter frost from settling on anything underneath. Any of us lucky enough to have these examples in our gardens can surely attest to their advantages. In order for this to remain a newsletter article and not a book I have refrained from noting any of the surroundings of the palms listed in the following table. The other caveat in reporting on something as subjective as this is that there really are no standard “rules” when it comes to freezes in our corner of the world. It seems that nearly every freeze is somehow different in it’s own way, be it a low temperature reading, the amount of frost, it’s duration and more importantly, the damage (or lack of) left behind. So what I have attempted to do is collect the results of several different freezes from several different areas over a period of time, then fuse them into one table, kind of an EKG for palms if you will. The only limit I had to deal with was the actual information that is published; there just isn’t a whole lot out there but fortunately there is enough to give us all some guidelines on most species.

And that is exactly what this article is, a guideline and nothing more. There will be a few readers whose results were different, maybe even totally opposite from what is published here and that’s to be expected from such a diverse topography as central Florida. This article tallies results from specific freezes and no others. Just because a Ptychosperma listed here died @ 25 Fahrenheit (hereon referred to as F) degrees doesn’t mean it will die @ 25F degrees in your garden, just fair warning that it could. On the opposite spectrum I know of several large Bismarckia nobilis located in “warmer” winter locales than Orlando, and they sometimes suffer severe damage at temps in the high 20’s while several large specimens in Orlando barely burn at 23F. So it would be silly to suggest that anyone totally eliminate any attempts to grow a palm based on this table nor should it be used to decide on planting a row of something marginal in the front yard. If the table indicates a palm that may be somewhat of a risk for you then plant just one or two of them, observe their progress then decide. There are plenty of factors involved when considering a palm’s cold hardiness. For instance the length of time the palm has been in the ground is very important. A well established planting of two summers or more will rebound from cold damage faster than a newly planted palm. The type of treatment the palm received is extremely important. Was it a well-cared for and strong growing specimen or nutrient deficient and weak from the beginning? After the freeze was the correct fungicide application rendered, did it live for awhile only to die from insect damage to the weakened bud, was it subject to prolonged cold spells before or after the freeze? None of those items are noted (newsletter vs. book again). The actual size of the palm also plays a part with some of the larger growing species. Thicker stems can help to insulate the irreplaceable growing point. Larger specimens usually have lots of fronds already formed in their “bud”, and thus are able to recover much faster than a smaller palm or seedling. The last factor to consider is that some palms can recover nicely from one freeze but what happens if they are hit with a 2nd blast the following winter? Or separate freezes during the same winter? If you look at the data carefully you will notice some of those results.

For the purposes of this article a freeze is considered to be any time when the low temperature has reached 32F. In the past 100 years there have been 54 freezes “officially” recorded in Orlando and Tampa combined. Twelve of them recorded lows of 29F or higher. These freezes are known as advective or advection freezes. They are caused by cold air masses being pushed into Florida by the polar jet stream. These air masses usually form in Canada with the truly frigid ones originating from as far away as Siberia. When a freeze occurs during the 1st night of a cold front it is almost always an advective freeze. These are rarely able to kill an established, healthy palm. Unfortunately the sudden drop in temperature will usually chill the moisture in the air which in turn forms frost. A little frost for an hour or so may cause some slight cosmetic damage to palm foliage but when moving in on the heels of warm, humid weather heavy frost can occur. Most tropical species can be completely defoliated unless under a protective canopy or other covering. Sometimes the accompanying winds can delay the settling of frost for most of the night by forcing the warm air radiated from the ground back down to the surface. Freezes with a low reading in this range are also of short duration (usually 3 hours or less below 32F).

Of the past 100 years twenty eight freezes had lows in the 28F to 24F range. It is at these temperatures that actual cold damage occurs and in some of the species with more tropical origins, death can be the result as well. A few of these lows can be attributed to advective freezes but the vast majority can be termed as a radiation freeze. This type occurs on the 2nd night of a cold front. In a nutshell there are usually no winds to delay frost settling and no cloud cover to help trap heat to the ground. Thus any heat attained during the day is lost, radiated into the atmosphere and a cooling occurs at ground level as well as an adjacent layer of air around it. When these conditions are forecast, protective covering is a must to minimize or prevent foliage damage for all but the hardiest species.

The remaining fourteen freezes from the past 100 years had lows of 23F or less. These “hard” freezes are usually not the norm for most of central Florida but when they do occur, all bets are off regarding most palms’ chances to escape any damage and in some cases survive at all. Even some of the most hardy and widely planted species (e.g. Syagrus romanzoffiana) can suffer severe damage or death if not properly maintained. Nevertheless the table identifies more than a few species which can survive hard freezes including several which at this time are not widely planted but deserve to be so, if for nothing else than their ability to withstand this type of cold. Mathematically, the chances of a severe or “hard” freeze occurring averages out to once every 7 to 8 years. You can adjust this figure to fit your location. For example draw a line from Tampa to Daytona. North of the line it is usually colder, south of it will be warmer with some coastal areas perhaps going well over a decade or longer without a hard freeze. There are also some areas known as “cold pockets” throughout our region. The best known is a large section with borders roughly west of Hwy. 27, east of I-75, south of I-4 and north of Lee county. When considering your location, remember that water does not cool as rapidly as land so wet areas have averaged 3 degrees warmer than dry areas. Also cold air is denser than warm air so it collects in pockets at the bottom of hills. Thus the eastern “half” of the state always cools slower than the western half. This has held true for both coasts as well as inland.

As more and more species become available for purchase this type of report can be expanded upon in greater detail as well as narrowed to specific areas (Orlando only, Tampa only, and so on). Each freeze can be isolated, the results broken down and noted for posterity. With the advent of the Internet, e-mail, etc. more and more information can be easily shared in the future and hopefully it will be. But for now this will have to do. All information gathered was collected from various past copies of our local newsletter, records from my garden in Orlando and finally two separate reports originally published in Principes by our own local palm pioneer/forefather, Dent Smith. From reading his findings and viewing other member’s gardens I have been motivated to try and grow as many different palms as possible all the while realizing that their presence on earth can be as temporary as my own. So go outside, grab a shovel and start digging!

FREEZE DETAILS (for database below)

Visit our friends below who made it possible to bring back this page of incredible information!

steelyeye.com provides excellent web design services at a low cost. They can produce a basic website for you in a single weekend.

Unrealities.com has inspiring essays and some original FAQ’s.

HotScams.com protects users from common and rampant scams spreading across the Internet.