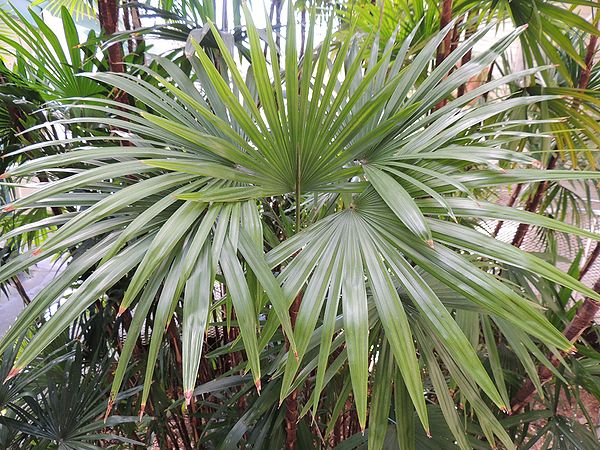 by John Kennedy from The Palmateer Vol.IV, 2000

More than 60 members took advantage of a beautiful day with temperatures in the 80s to visit Hersh and Jackie Womble’s 10 acres of palms (and lots of other plants, too) on October 28. The setting is slightly rolling hills, in semi-rural country just beyond Groveland, about 20 miles northwest of Orlando, in Lake County. Groveland is typical of those tiny north-central Florida towns, complete with a blinking light and two blocks of assorted small businesses, that has not yet been reached by the tentacles of the big city not far off.

Given the relatively chilly locale, it is a show place of palms, and some cycads, that can handle some winter cold. Hersh mentioned the Great Christmas Freeze of 1989, when temperatures dropped to 17 degrees. As might be expected, an assortment of Butia species-of various sizes–are on view, together with lush needle palms.

An interesting contrast is provided along the front of the house, where Rhapis humilis, rare in Florida, is planted side by side with the more familiar, and more rampant, Rhapis excelsa. Those from more southerly parts who have not had much success with Chamaedorea radicalis were surprised at how good-looking it can be under obviously more favorable circumstances.
A pleasant sheltered walk behind and to one side of the house revealed, among other plantings, several husky Syagrus romanzoffiana leading a (so far) charmed life in this setting.

A screened porch, brick-floored, on the back of the house-and almost as big–was the site of the Board meeting. A local watercolorist, Ruth Wood, exhibited for sale lovely pictures and prints of palm details. She donated one large framed picture to an auction for benefit of our chapter. The highest bidder turned out to be Hersh Womble. Why are we not amazed?

The serving tables for lunch were set up in the garage. Treasurer Mike Merritt, of course, took the money. (The serving line was manned, you see, by luminaries of CFPACS.) The Editor offered slices of beef for sandwiches; to his right, our president, Neil Yorio, offered pork. Beyond Neil, secretary Chuck Grieneisen, presided over the fried chicken. At the end of the line, Central vice president Marilyn Bachmann dished up potato salad. Our hosts provided the beverages: iced tea, soda, beer. No one went hungry and a few (no names) came back for seconds and thirds.

Perhaps the central event of the day for many participants was the palm and cycad sale. Quite a few members brought plants, some as donations, others as splits with the chapter. Among the miscellaneous non-palm, non-cyad offerings was black bat flower: pretty, houseplant leaves, with a small oblong flat black flower that looked as if it had died.
As is usual on these occasions, all departing vehicles seemed to be full of swaying fronds. Needless to say, a good time was had by all. Good chat, good company, good palms.