Seaweed for Cycads (and palms too) 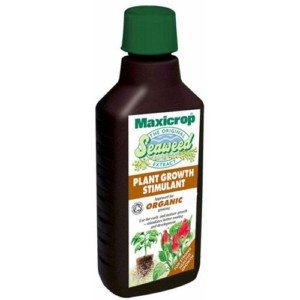 by Chuck Grieneisen from The Palmateer Vol.III 2000

I like to try new concoctions and potions on my plants. I have found one in particular that got great results. Specifically, it is the “maxicrop liquified seaweed”. The effect it has on palms and cycads especially, is that it grows the caudex ( trunks) like crazy. I do not know why it works so well. I originally tried it because of the growth producing qualities I had heard about. The nutritional content is as follows:

On cycad seedlings, after the big caudex growth, they produce leaves that are sometimes twice as large as the previous ones. On my best responding cycad ,Encephalartos gratus,(the one pictured) the caudex seemed to about double in size in about 2 months; growing from maybe 1 to a 2 inch caudex. It was noticeably larger after one application. The caudex did not grow any more in the next 2 months, but that is when the big leaves came out.

Some cycads did not respond as well. I will give you my preliminary results with cycads and their response to the seaweed. I have used it for 6 months on the following:

It also works with palms. I have a small Phoenix roebelenii that I had for about 2 years. It had a trunk about six inches tall. I admit I did not fertilize it well for the 2 years and it stayed almost the same in girth and height. After about 4 months of seaweed the girth of the trunk went form about 8 to 12 inches.

I admit this was not a scientific experiment. I did not have a control group. In the words of Regis Philbin,it was “out of control”! But I will let the photos speak for themselves. I only have a single E. gratus, but the Lepidozamia came up like that 10 for 10.

Tom Broome is now doing a controlled experiment to see if it will increase cone productions in cycads. I also tried it on bananas. I had 2 banana plants that were large enough to produce bananas but did not do so all summer. After the seaweed they both started producing bananas in about 2-3 weeks. This makes me think the seaweed could produce more seeds in palms,or cones in cycads. I do not have any large enough to try. How about you? I would love to put some on a bottle palm to see how fat I could get it.